Hwy 33 Bridge over the Homochitto River

Hwy 33 Bridge over the Homochitto River

Is the bridge open to two lanes of traffic yet? If not does anyone have any idea of when it will be completed? 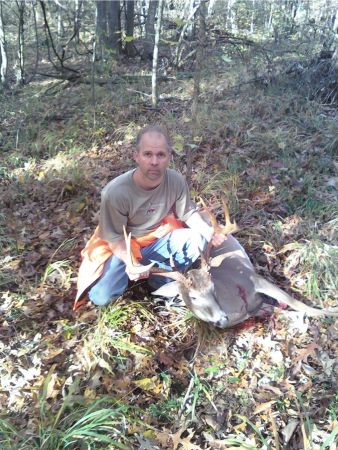 What a great last couple of days
Yes I have a permanent grin on my face that I can't get rid of. I wipe and wipe but it doesn't go away.

My season and world did a freaking flip on my last hunt.

Two bucks down. 1st buck is a spindly 14 inch spread, 8 point. Shot him in the chest and he dropped. He was headed to feed in Noble's field I think.

This morning I was back in that same stand but it wasn't my first choice. It was my third so I sort of owe Johnny Wayne a big thanks. Due to where he was wanting to hunt in the evening and where he was 'Suppose' to hunt this morning I avoided those to spots and went back to the 'Noble's Field Stand'. I was planning on shooting a doe for meat so this stand isn't where you want to shoot a doe.

Well as luck would have it at about 7 am I see 3 deer moving through the woods. I figure they are going to cut across Nobles field or skirt it and bed down in the pines on the other side.

The first deer is the biggest. I grunt and he stops just before leaving my sight. The third I never saw his antlers and the 2nd was a rack but don't know exactly how big... just smaller. Well when the lead buck stopped he was behind a clump of sweetgum trees that sprung from a cut sweet gum years ago. All I had was a shot at his head, base of his neck and gut or maybe some liver. Most of his body was behind the trees. So I took the neck shot before he exited my life forever. He dropped on the spot.

No four wheeler access and you have to cross the grand canyon or just up stream where the ditch is not as deep (only about 12 feet) but the sides are straight down almost. The rope bridge I built this summer is the only easy access to it.

Well we strung a rope across next to the rope bridge and got it nice and tight. Used a lanyard to hook one end to the rear legs the other to the head and these Y to some carabiners connect to the rope. Another rope pulls the deer across.

Well the 8 point had the rope sagging a lot and I had to climb down in the creek to help push him out when he made it across so I knew the big boy would probably break the rope so we added a second rope to double the strength. Pulled him across this morning with less sag than the 8 point even though he weighed probably 60 pounds more.

Big boy is at the taxidermist right now!!!

And here is the picture of the 13 point... thats right thirteen point depending on what you call a point. Some might even call it a 16 point. B&C would only call it an 11 but I am going with 13 because a couple of the points are freaking points in my book. A very rough crud green score puts him at ~150 points gross. Spread was 20.75 inches. I am freaking happy as can be. My best buck ever.

These picture aren't the best should have some when I get the good ones from Johnny Wayne next time I go up to the property.

He is a main from 9 point with main beams about 25 inches long. His beams are still 5 inches in diameter after his first big point. Don't have an accurate measurement on the bases because they were so full of stickers and burrs and all we had was a retractable metal tape.

Other than the main frame 9 he has a kicker on his right beam coming off his G2. It is visible in the picture. Also he has a point behind the right brow tine that goes straight back. Then he has three points on the left brow tine sticking backwards. And two other semi points around each base that you could call a point if you want to.

I am going to the doctor monday to see if he has something to get rid of the permagrin I have now!

omegaman has not filled this section yet.