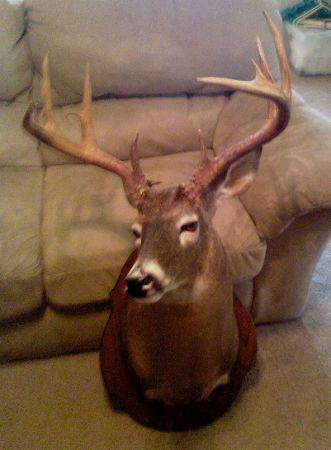 Just picked up my deer from the Taxidermist!!! Woohoo!!! Picture is not very good but the camera isn't saving the pics to the card (full? I dont know) so this is from my lowly cell phone. 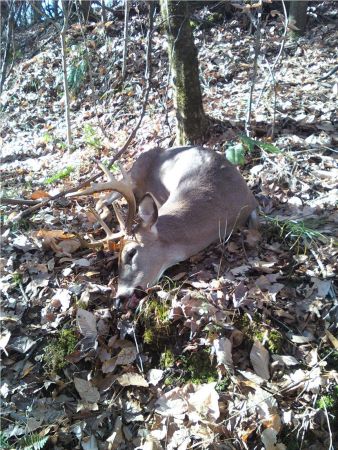 And a story to go along with it!

Here is the whole story. Hunted yesterday evening. Saw a doe in my food plot on powerline. She stayed and then left and then later she or another do guessing the same one reentered and feed till dark.

At dark I was trying about to try to sneak out. I see something between me and the do. It is freaking dark now and it looks like a possum. I am still in the stand. It notices something isn't right and turns around and heads the other direction. Now possums are stupid and rocks. So I doubt it could have been a possum. Maybe a skunk??? Or they just as oblivious???

This morning I head to a stand north of the rope bridge. I put it up before the season and I think it is a bust. Two big bucks down so no pressure. I sit for a hour without seeing anything. No trail cam pics from earlier this year and I think I know how the mover circles around the stand without passing close. So I unhook the stand an move it up the ridge to a possible alt. I put out my trail cam and enter a small field. I say field but it is about 70 yards long and is shaped like the number 7. I enter near the bottom of the 7. A see a deer headed west. I am facing west. I just wait. Then a 2 does cross to my north right at the bend in the field. Headed east. Never knew I was there and did not look to be in heat.

I move to the bend of the field and sit and wait. After a short wait I see a good buck headed to me. It enters the field on the top port of the 7 almost where the does crossed but it is headed north, not exactly on their trail. I think it saw me earlier but the does didn't. I think he is trying to refind them. Just a guess. He is close I shot, he runs off. Looks to be a pretty good 8 point.

Then I see a cedar branch. My bullet hit the branch probably a couple of feet from the muzzle. Never saw it in the scope. Look for sign of a hit but didn't find anything.

Dejected I retrieve the stand and decide to hang it on a ridge near Miss Cogans abandoned house. This is right next to the steepest valley on the lease.

I set the stand down and I hear a deer moving in front of me. I catch just a glimpse of movement as the deer leaves the area. I move forward to where I wanted to hand the stand and sit down. A few minutes later I see antlers dead ahead moving towards me. I watch him through the scope till he gets through enough of the under brush and he turns broadside and then angles away from me. I shoot.

He runs 6 yards and then disappears from view. I listen and hear nothing, no thrashing. My heart sinks. I can't believe I screwed up another chance at a rack buck in one morning. I wait a few minutes and then ease over to where he was standing. Nothing!

Immediately on the deers path is a steep valley that is very close to being straight down. I stop and say a prayer hoping that the buck is dead at the bottom. I take a few steps toward the crevasse and I see the buck on the far side of the gully. Only 25 yards away but with a 15 yard deep valley between us. He is looking at me. I shoot him in the chest and his head slowly goes down and he dies.

Luckily there was an old trail on the other side of the valley or I would have had to bring him out in pieces.

First shot was decent. Hit his right side and bullet traveled up though the guts and liver, caught one lung and exited just behind his shoulder. Second shot him him square broadside and exited the same spot almost.

The buck was a nice 10 point. Actually a small 10 point. spread just under 15 inches. 5 points were between 5 and 6 inches long. Brow tines were very short. G4 on left is broken in half on the left side.

That is my limit on bucks so I am done for the year.

Hello,
I don't have anything special to say just wanted to stop in and say hi! I hope this website really takes off so lets post up some messages and not wait for other people to get the reports flowing.

I am at the moment in great anticipation of the upcoming deer season which is what I live for. I hunt in Jefferson Co. on a small piece of land that I bought from my uncle. I have been hunting this peice of land since around 1984 for the most part with a few years where I hunting in my home state of Louisiana.

Luckily I bought the non-resident lifetime lic. a couple of years before they discontinued it. Whew!

Mike Guerin has not filled this section yet.