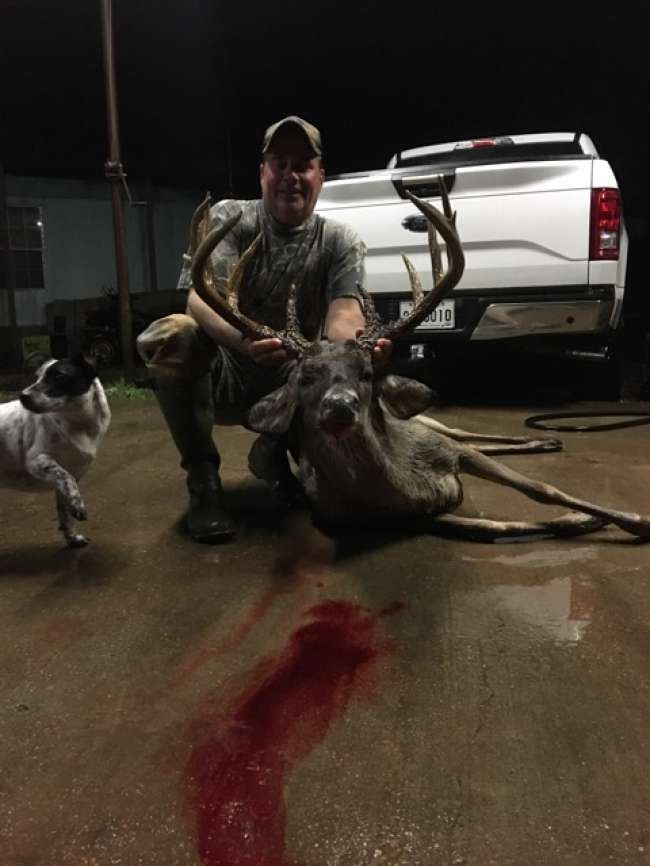 A big surprise came along while hunting with my son and his girlfriend last Saturday evening in Lincoln County on some leased land. About 5:10 pm i spotted a doe making her way out of the cutover. Thinking to myself this is just like the one i had seen earlier running for cover due to the bad weather moving into the area.As i looked behind her i spotted some movement and some horns above the pine trees. I raised my Leupold binoculars i saw the buck was about a 10 pt and was mature enough that i was going to try and get a shot so i focussed on the next opening. As soon as i got a clear shot i squeezed the trigger on my 308 Browning A-bolt. The buck ran about 10 steps and stopped i then shot again this time he dissappeared. Once my son arrived we walked to where i last saw the deer only to find nothing. After about 20 minutes of searching i walked upon a deer that was much greater than i thought. The deer was hit twice, sported 14 countable points, and had a large body. After getting the deer out of the cutover i realized this was my biggest deer to date. The deer was scored at 173 1/2 inches, had a 19 1/2 inch spread,5 inch bases, scored as a 13 pt, and weighed 221 lbs. Oh by the way we had no pictures of this deer all season.

Lil-nac has not filled this section yet.