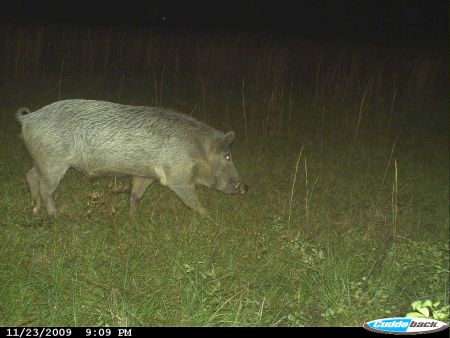 Little 8? in response to a report titled:  Little Baby 8

Like any ethical hunter would do, I let a borderline shooter (a respectable bow kill / I estimated 16 in. wide 8 point w/ 18 in. mainbeams) walk on a WMA (Mahanna) this past January )NOT a shooter by Mahanna's rules. No big deal, but don't get me wrong, I would have loved to harvest the deer.

Does anyone know what the penalty is for taking a deer too small on a WMA, according to the state's regulations? A fine? A slap on the wrist? A suspeneded license?...

I am interested in trying a new broadhead this year (I'm not a big fan of mechanicals). Has anyone used an 'Atom'? If so, what kind of results did you have?

either this deer is inappropriately named, or you need to take me huntin' with you!

Andy, thank you for following up with Chad. I'm glad to hear that MDWFP does penalize the folks who do not respect the antler criteria rules on the WMAs. Hopefully people will read this thread and respect the rules so we can all have better quality deer on our public lands in Ms.

Andy, lol! I bought some Rage last season...almost cut finger off trying to get the dang o-ring on it. you're doing better than I did with 'em!

Thanks Andy! I'm really interested to see what he says.

Shoot em up, it was so close to legal I still question myself as to whether I was a complete idiot for not taking the shot. Like I said, the width of the rack was right at 16 inches, but the mainbeams were not quite 20 from what I could tell, but dang close. Not a lot of mass or tine length though (5-7 inch g2s). I passed on it on the 2nd morning of a 3 day hunt, and was really hoping for a hands down shooter. Of course I didn't get that opportunity and was mad at myself for not taking the shot. But, I sure didn't want to find out the hard way what kind of trouble I'd be in upon chekcing the deer in if it had been shy of the 16/20 rule.

Thanks Mike, I appreciate the feedback. You are the first person that I've talked to who has tried them out; it sounds to me like I need to give 'em a shot. You are definitely right, the Atom is not easy to find locally.

I like the idea of the wire flexing as opposed to a traditional fixed blade getting lodged into bone on a not so perfect shot.

Hopefully I'll have pictures to show with a deer down, courtesy of an Atom.

Which model Vortex do you use?

Bowhunting is what I enjoy most. I have been addicted to it since I bought my first bow at 16 years old. Nothing is more exciting to me than getting within bow range to a mature whitetail deer. ANYONE can pickup a high powered rifle and harvest a deer, but not everyone has the patience and discipline to take a mature whitetail with a stick and string! I grew up mostly freshwater fishing, eventually started fishing inshore, and in the past few years have learned the ropes of offshore angling.