Give a little back 'with pictures'

SAD in response to a report titled:  Youth Hunting in Mississippi

Give a little back 'with pictures' 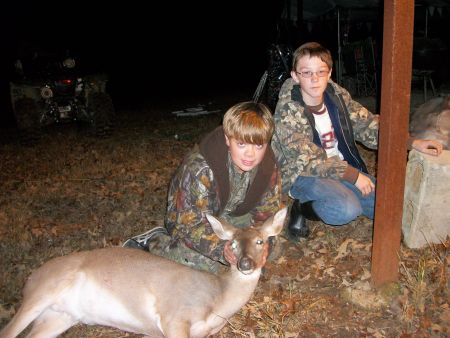 my quest to create new hunters was sucessful,phillip is 12 and chris is 14 neither had ever shot a rifle or deer hunted.started out i advertised for 2 kids that had never hunted before these 2 responded,met with parents told them i would teach them gun saftety and how to shoot,then set atime we could get together,both boys are very respectful and polite 'good parents' they were a joy to be around,,so fri nite before hunt i go to pick them up and tell them they wiil have to cut their cell phones off and phillip's mom didn'nt like that too much,but i told her we were going to hunting camp all phones off and they could call her when we got there and after hunt on sat and they could play cards or checkers.so fri nite get to camp fix up a good fire and while i'm cooking burgers they learn to play cards by the fire and look at stars,get em in bed and let them watch tk and mike videos they loved that.sat morin up 4.45 fix bacon,eggs,bisquits get em ready to go.Now i teaching younger guys 18 TO 24 that i've taught to hunt to give back, so phillip is going hunting with ryan '22' and chris is going with chad'20' both are very experenced hunters,we have two box stands that are jus for women and kids for first half of season,so bout 8 am i hear a shot and phillip calls me tell sme to come with 4 wheeler,he had shot a good buck but made a bad shot on it,ryan videoed it but we never found it'he was so sad',,by this time it was almost lunch and my church guys was cooking and shooting skeets so carried them over there and taught how to shoot sheets,on way back to camp for afternoon hunt they both went to sleep,got to camp and they eat camp chili,the afternoon hunt i took phillip got half way to stand realized i had forgotten camera,we were running late got nearly stand and saw a doe looking right at us i told him to freeze and she finally trotted off,i said thats exciting he said i can't move'he had literally froze in place,got to stand then magic hour i saw a 3 deer coming way off 3 does he got up got ready but every time he get on her she would move,i don't know where the stand was shaking from me shaking so bad or him,finally she stopped he shot she ran offhe said did i get her i said i think so but it was too close to dark,so we went back to cabin he called his dad and he came down and we got the coleman lattern'it makes blood glow' went back and she was laying 10 yds in the woods he made perfect shot you never seen such high fives and smiles on two people,since then phillip has talked his grandad out of his 30-30 and his dad has taken him hunting'sucess',chris did'nt even see a deer but wants to kill one bad so were trying to get back together to try and get him one,spend some time with a young person you never know how much fun till you try 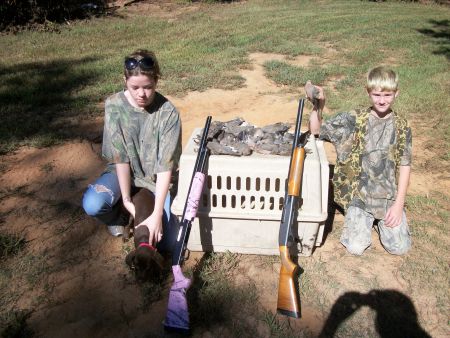 I've got alot of kids that call me pawpaw but none are blood,now going to have my own granddaughter,now iguess can start buying some guns
kinda like allisin's

Story starts 21 yrs ago when i met jtt at a teenage mutant nija turtle birthday party,riverbilly jr an him were having a birthday party together,they were 2yrs old and 3yrs old,my life has never been the same,they are like two peas in a pod,they've been best friends for all these yrs,their saying is' if it flys it dies,runs i'll chase it,swims i'll catch it'an its true they havehunted an fished every corner an hole in these parts and lots of other parts of the country,they made two of the funniest real life hunting videos you've ever seen,they are real life tk and mike,i've set around camp fire and listen to their hunting episodes for yrs and talk about all these hunting shows and what a dream it would be to get to do it,long story I WANT GO INTO ALL DETAILS so cus from mossy oak call jtt looking for a good ole boy to teach to film,six weeks ago jtt was working construction,now he has a desk at mossy oak and is one of their new camera men,,way to go jtt,heres to you living the dream
RIVERBILLY
Distinguished Poster

I been blessed to have been raised hunting and fishing,an to those that have been given so much,much is required so for last 10yrs i have been giving back ,teaching young ones how to shoot and hunt.I have made some life long friends jus giving a little back,So i need your help this year,i'm looking for 2 kids between age 9 an 16 'boy or girl'that have not had the priveledge to hunt or shoot that would like to go,maybe they don't have anyone to teach them or take them,,i will furnish place to stay,food,gun,ammo clothes if needed,i will teach them proper gun saftey and how to shoot,then take them hunting on my place in nov 6 and 7,,would like someone within 2 hrs of fulton,ms.,,should you know of someone that would quailfy let me know ,,,thanks rb

September 16, 2010 at 4:48pm
A comment titled: SAD in response to a report titled: Youth Hunting in Mississippi

I FEEL REALLY BAD FOR YOUR DAGUGHTER,SHE SHOULD NOT HAVE TOO EXPERIENCE THIS,THEY HAVE A JOB TO DO
AND WE NEED THEM,BUT THEY DONT HAVE TO BE JERKS, I THINK IT MAKES THEM FEEL TUFF TO TREAT SMALLER FOLK LIKE THIS

December 07, 2011 at 9:48am
A comment titled: great in response to a report titled: Birthday Buck

hunting congrats to all

my luck has got to change congrats

on a nice deer

December 20, 2010 at 3:54pm
A comment titled: congrats in response to a report titled: my first real buck

December 07, 2010 at 9:33am
A comment titled: in a life time in response to a report titled: my daughter and the impossible shot

December 07, 2010 at 9:29am
A comment titled: great in response to a report titled: deer finally,beginning to move

u got u one mike congrats'little ones more tender'

November 17, 2010 at 10:09am
A comment titled: congrats in response to a report titled: Arrowed A Buck Today

riverbilly has not filled this section yet.