Taking the boys on the mighty mississippi 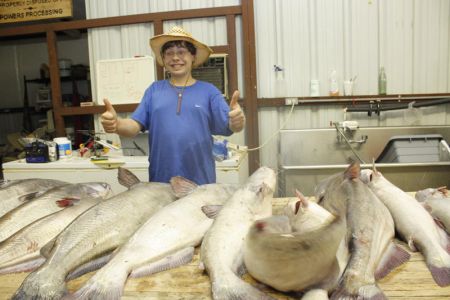 I really do not know where to begin. I had a special chance to spend some quality time with two 13 year old boys on the MS river. One of them my nephew. It seems like just last week we were fishing and i was helping him bait his hook. Now at 13 y/o he is running the boat up and down the river. He has learned to read the banks of the river and does a mighty fine job. The other boy, i will call him (boone) great kid from Texas. He didnt grow up on the river. Matter of fact Aug 3rd was his first time. He had never had the pleasures of baiting his own hook or handling his own fish. Our first task was to go and catch some bait. We went to a little pond off in the woods armed with a couple jig poles and some wigglers. At first he was not to sure about the baiting hooks. After i showed him and caught a few fish, he was starting to catch on. It was some where near 100 F that day but we was out of the house and having fun. I baited the hook and set him out on the mission of catching the bait. With the two boys they kept me busy. They would catch the bait and put em in the bucket. My job was to take the bucket to the live well. After a few hours of soaking in the sun it was time to hit the mighty miss. By this time the boys were having fun. We met with my brother and off to the river we went. When i backed down the ramp we got out to get the boat ready. My nephew jumped in boat and said he was ready. My brother well he stood back. My first thought was he aint running the motor just last week i thought i baited his hook. Well much to my suprize i was wrong. I backed him down and he had it under control. we all got in and headed up river. We started putting out the lines and the boys were having a blast. Alot of laughs and jokes from one end of the boat to the other. After the lines were set it was time to pole fish. We found a nice sand bar with a shade tree but we didnt find no fish. We got to enjoy the sunset on the mighty miss. As the soond started to sink we decided we would run lines and rebait for night fall. The first line we came to had several cats on it. The first fish we come to maybe 15 lbs, my brother netted and we had him in the boat. Well at this point I thought Ol Boone was fixing to leave the boat. This is a boy that has grown up in the city. He had never touched a fish. At first he was a little shy of it to say the least. I told him it was time to become a redneck. We were far from the city lights now. And besides the next day he had to be the net man. We finished with about 10 good size cats as the sun sank we loaded the boat waiting to see what the next day would bring.
Well the boys being boys stayed up playing games till a little past midnight. So 0600 morning one, i had the pleasure of turning the boxer bulldog loose in the beds with them. They got up and off we went. Boone was titled net man and well my nephew the motorman. We hit the river to enjoy another beautiful sunrise on the river. Our first line well it was loaded. We had some good ones. After all four lines were run we had a plenty of fish. Now it was time for pictures and the cleaning.
I reckon to keep from boring everyone i will carry on. I had the pleasure of spending three days on the river. Boone well he went from never touching a fish to throwing them around. And my nephew well boy am I glad he is now a lil man. He went to helping skin the fish. After all this we decided it was time for a break 3 hot long days on the river and several hundred pounds of catfish. We earned the break. Now it was time to do some perch jerking.
We headed to an ox bow lake and the water was pretty. i started getting the poles ready and was preparing to help boone. This would only be his second time doing this. Next thing i know here is my nephew again. He started showing boone how to do everything. I almost felt as if i was to old to be there. I let him go on and teach boone how to do it. It made me sad in some ways and proud in others. I use to help him and now well he didnt need me. Although to see him taking up time with someone else was great. We did catch a few perch and it was time to the cabin. Next morning well we had to try it again. We caught a few more fish. By this time boone had become a lil redneck. He had a different look about him and was even talking different. I will never forget the memories of this special trip. See attached pics. I think you can see the enjoyment on boones face! Never mind me i am the one that looks wore out.
Remember what we do for ourselves when we die dies with us. What we do for others remains immortal. Take every chance you can to get a youth outdoors.