As Big As They Grow 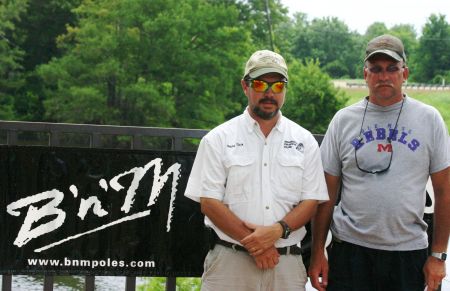 Big Day At Barnett For MCC

The Magnolia Crappie Club wound up its 08/09 Regular Tournament Season (our 17th season, by the way) on Barnett Reservoir yesterday. And, boy, was it a big day for us.

Let me tell you about it.

The day started with a pile of folks around the breakfast tables at Tommy's Trading Post. Get this--on the very last regular event of the year we had our largest turnout of the year @ 42 boats.

Plus, we signed up 2 brand new teams--one, a husband and wife team from Memphis and another from up around Columbus. And, in addition to these new teams, we had a couple of first-time fishing members fill in as subs. Look, I don't recall ever closing out the year on such a high note.

It's always encouraging to see the youngsters show up in our sport. Yesterday, we had several school age kids fishing with their dads or grand dads. One, young 3rd grader, fishing with Grandpa Lonnie Hannah, Pelahatchie, scored in the Top 5 for the day. Lonnie stated proudly at the weigh in that 'Jason caught at least half of our weighing fish.'
--------------------------------------
Sunrise Service
Perhaps the highlight of the day for many of us was the memorial service we held at sunup over at Brown's Landing. We've had 10 MCC members die in the last few years, and once a year we stop long enough to remember our dear friends and their families.

Now we've done this service 3 times, I think, all with a great deal of meaning and respect, but for some reason yesterday's was especially moving for us.

Perhaps it was the absolutely georgous sunrise that God provided. Maybe it was the wonderful attendance of dozens of family members--several from out of state--and their expressed appreciation for the MCC bunch.

Maybe it was Elvis singing 'Amazing Grace' or Willie Nelson's 'Uncloudy Day' or George Straight's 'You'll Be There'--not your normal memorial service entertainment crowd, I know--but all seemed to fit just right for our group.

What ever it was, the 30 minutes we took to lay a wreath on the water and re-tell a few memories of our dearly departed before going to the lake to fish our last event was special for lots of people.

I saw a few grown men crying yesterday morning. I also saw some of the brightest smiles and biggest hugs and warmest handshakes from many of us.
-----------------------------
Tournament Results
Look, we have learned long ago that when it comes to fishing a tournament on Barnett, especially this time of the year, we are fishing for second place. Yep, you guessed it, Rabbit and Jane Rogers walked away with it. No contest, besting the other 41 teams handily.

I don't remember the weight. It was a foregone conclusion before the scales ever got set up. I think the Rogers' best 7 weighed right at 14 pounds. Congratulations to Jane and Rabbit on your tournament win and on your 1st place Overall Points position for the 08/09 season.

Gil Woodis and I were just trying to hold on to 4th place overall for the year. We had a couple of teams within striking distance and both the 5th and 6th place teams had vowed earlier in the week and at the blast-off that Gil and I were 'done'.

Sorry, Jim & Tommy and Brad & Chris. You boys just didn't get 'er done yesterday. See you at the State Championship next month. You were good, just not good enough.

Now, just a heads up, Jim & Tommy. Gil has already warned me not to help you fellers this time around. Says he's tired of my showing you boys where to fish and what to fish with and then getting our butts whipped by you on these two Delta Diamonds. Look, I'll pal around with you off the lake. We'll cook liver and onions, drink a few cold ones, swap lies, etc. But, I just can't 'show you the way' once we get serious on the lake.
--------------------
Up Next
The Magnolia State Crappie Tournament will be held June 19-20 in Washington County. This 2-day event is MCC's big hoo-rah, end-of-the-year event. Our teams have to qualify to get into this State Championship, by participating in 7 of our 9 regular events.

There will be 38 or so teams headed to Lakes Washington and Ferguson to battle current reigning State Champs, Bobby Clark, Newton, MS and Doug Hollingsworth, Decatur, MS. Click on photo to enlarge.

It'll be interesting--Ferguson, especially. As you know, the Mississippi is very high at the moment. Personally, I think that's great. Similar to golf, the high water changes the course a little from previous plays up there. Makes you re-think your normal patterns and learn new ones.

The Magnolia Crappie Club is a good bunch of folks. Contact President Brad Taylor, 662-820-4581, for more info on the best crappie fishing club in the country.