Plenty of Divers in Mississippi Sound...Ross Barnett Good Too! 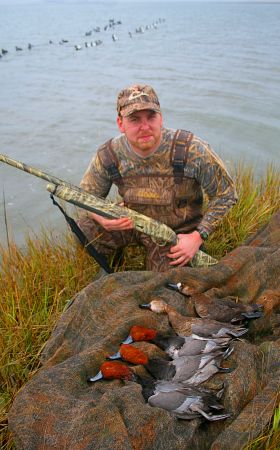 The last couple of hunts here in south Mississippi have been quite good. On Friday I guided Randy Patrolia of Hattiesburg, MS on a half day hunt that delivered some gorgeous drake redheads, and a greater scaup. When a flock of 50 or more committed over the decoys, Randy allowed me to get in on the action too. My kind of client!

Randy will be back in two weeks, this time he'll experience diver hunting out of a one-man Ron Bankes layout boat. I'll keep you informed on that low-profile hunting after the fact. Randy is surely excited about the upcoming adventure.

Sunday's trip was a classic bluebill hunt with a mix of buffleheads, and ducks swarmed the Mississippi Sound a few hours before sunset. Had some great shots at redheads, but for some reason the guys shots weren't true.

Maybe it was the sun in their eyes, or due to eye strain from the first six hours of trying to hunt in driving rain storms. Hey, I can take you to the ducks, but I can't make you kill them. At least they got to see the sky filled with thousands of ducks at one time, and that's half the fun to any hunting trip.

Amazingly, we're seeing more scaups (both greater and lesser)a.k.a. 'bluebills' than we've seen in years. Considering their numbers being down, a great number of these birds have been wintering on the Mississippi Sound.

Duck hunting reports from the Ross Barnett have been good too, and my contacts there have been shooting pintails, mallards, bluebills, and plenty of buffleheads and gadwalls. Reports of hunters getting swamped in small boats up there have been reported as well, and let that be a warning to all of us to know the limits of our boats, and have all the proper safety geat aboard.

All of the freshwater runoff has put a damper on speckled trout fishing here in south Mississippi, but it should start picking up again if the heavy rain lays off. Anglers can still catch black drum and sheepshead when fishing around barnacle-encrusted piling and such. Live shrimp or fresh dead will entice bite from both species.

Enjoy the new year of outdoor adventures, and by all means keep it safe out there!