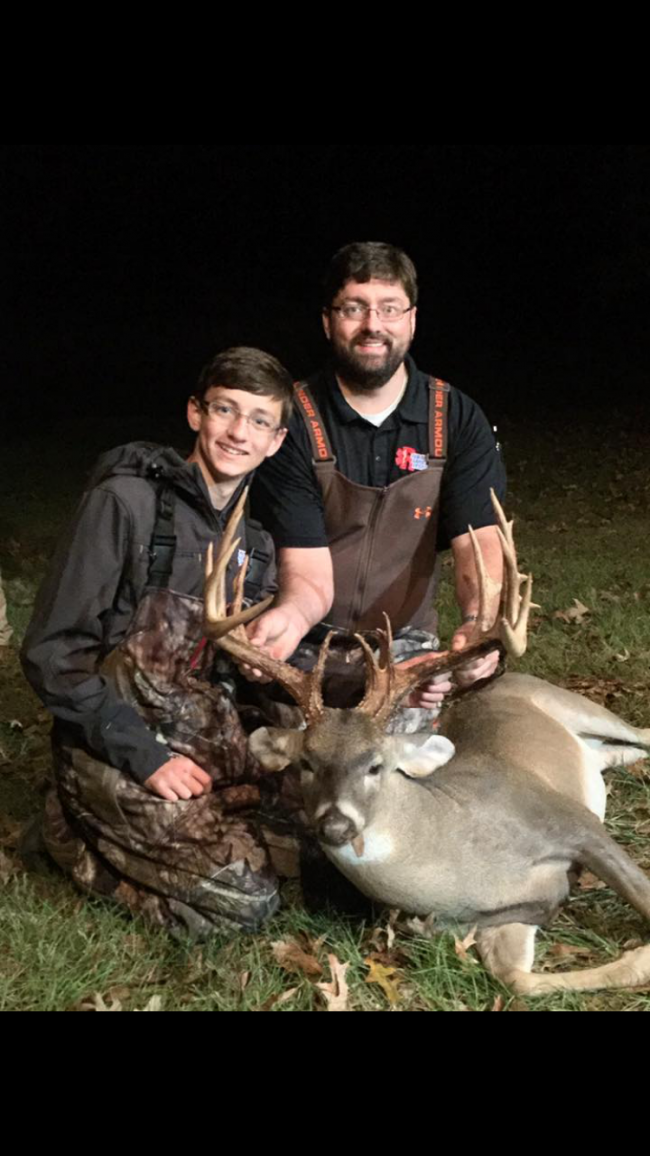 My dad and I just left the Rural Rapid Response Thanksgiving party, having decided to go hunting. We talked about the weather and the wind on the way while trying to decide which stand to hunt. When we finally arrived at our camp in Eddiceton, we grabbed our guns and hunting bags. We had still not decided which stand to hunt. As we were putting our camouflage on, I realized I had outgrown my camo from last year, and I had to use my step mom’s. We talked about which stand I should hunt and how the wind would affect my hunt. We finally decided I would hunt a new stand and my dad would hunt on the river stand. We talked a little more, and discussed what to call the new stand. That evening we decided to call it The Cross stand because the food plot makes a crisscross pattern. I headed out to the stand with a walk that seemed to never end, but eventually I made it. Next, I crawled up into the stand. I struggled to shut the door which was bent due to the weather warping the wood. The first hour I watched a handful of turkeys feed across the food plots my dad and I prepared earlier this year. I played with a wasp that was too cold to play back, and broke some dirt-dobber nests off the corner of the stand. By the second hour I was playing on my phone and watching YouTube. I had to read the subtitles because I knew I could not turn the volume up without scaring any incoming deer away. At about 4:30 I saw a doe and watched as she walked on and off the food plot. My dad and I were texting back and forth as told him about the doe. He asked if she put her tail up before she ran. I said yes, she did. About then, I turned to see if anything was behind me. There were two deer that had slipped out from the brush east of me. I slipped my rifle up instantly because I knew that the buck standing before me was at least a good eight point, but I had no idea how great of a buck he really was. I lined up the rifle my dad built for me, remembering all the important rules he taught me when shooting a deer. I squeezed the trigger and shot! He dropped in his tracks at about 70 yards! I instantly texted my dad. Just a minute before, I was wondering if my hunt would end with a doe walking out of the field. Then, BAM! The deer of a lifetime walked out. The spike, which was beside the big buck, just kept eating till 5:11. He then looked at the deer beside him, jumped, and ran. I thought he must have been deaf, blind, and stupid. I called my dad as I got down from the stand. As I walked across the field, I counted 18 points at first. I sent my dad a picture, which sped him up. I was so excited when he got there and counted 20 points! We both freaked out with excitement! He left to go get the truck, but I stayed because I thought it was all a dream and I would wake up if I rode to the cabin with him. When my dad got back, he drove me and the deer up to the cabin. The news of killing a big deer must travel fast because, within 20 minutes, there was a crowd of about 13 people congratulating me. All of the neighbors told us about how they had seen him on game cameras since this summer. They told us how the deer would stay on their land in the summer and would disappear when hunting season began. After the excitement died down, we went to the taxidermist who also congratulated me. We dropped the deer of a life time off there and head home. I must admit, I was still wondering if all of this had been a dream.
Reply