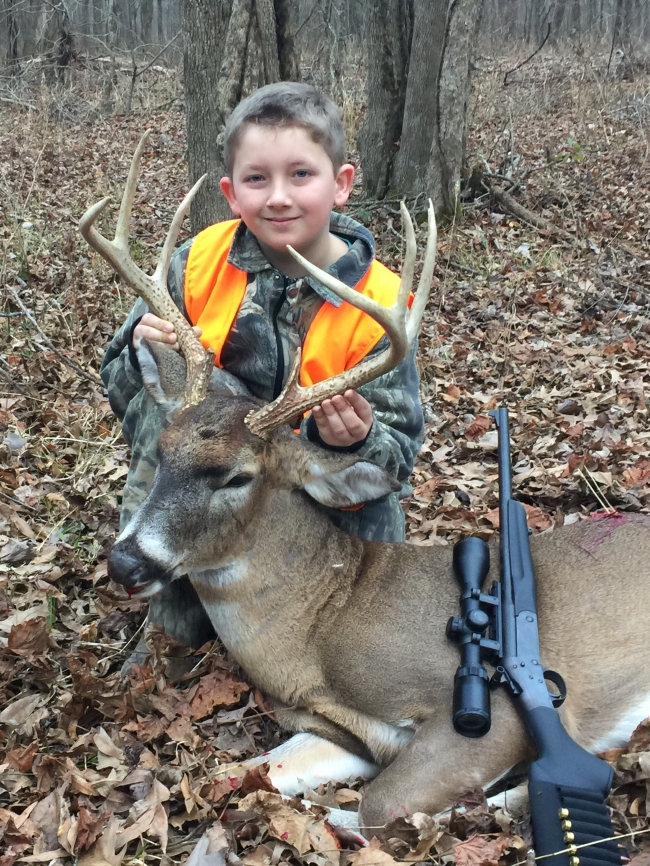 My name is Charles King, my 10 yr Old son Ayden killed this nice 8 point, his first deer ever, on 1/13/17 on public land, the deer stepped out into the plot we were hunting at about 7:30 that morning. Ayden was the first to spot the buck and whispered excitedly 'there's a buck!' I threw my binoculars up and looked at the deer, I couldn't see that he was a good buck, I said ' shoot him Ayden!' And before I could plug my ears the gun went off! The buck wheeled around and went back into the woods the way that he came out. I asked Ayden if he thought he hit him and he said 'I had the crosshairs on the shoulder and squeeze the trigger just like you tought me!'
We gave the deer a few minutes before decided to go see if we could see any blood. As we we're walking towards where he shot the deer, we got about halfway there and I looked out into the woods and could see a white belly. I stopped and told Ayden to look as I pointed towards the deer. When he saw the deer his mouth dropped and I think he went into shock! Ha ha! We celebrated and high-fived for a minute, then went to retrieve his buck. It was a hunt neither of us will ever forget! I was more excited for him than I was after killing any one of the trophies I've taken over the years! Ayden's buck had a 16' inside spread, 20 1/2' main beams and weighed 190 lbs. What a first deer!! I couldn't be more happy for or proud of him!!
Reply