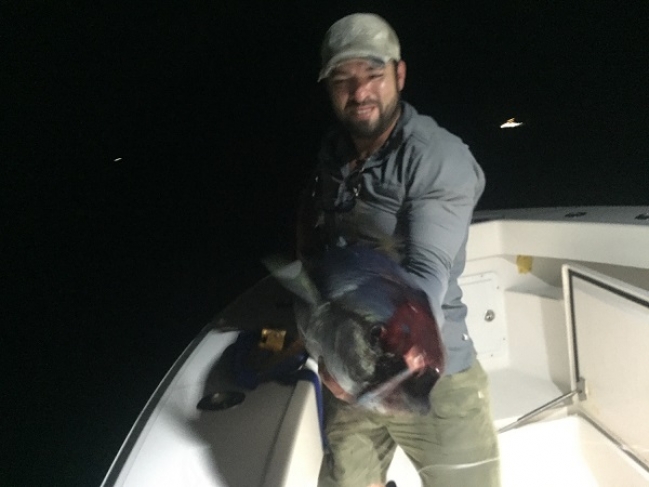 We made our 2nd overnight trip of the year last Friday night. Started off poorly with 1 of a 4 man crew backing out on us less than 30 minutes before he was suppose to meet in Belle Chasse. 2nd man of the 4 man crew out of the blue got sea sick at our first drill ship stop.. He understood that we were 50 miles out and there was no turning back, eventually he did the deed and fell asleep. That left Jimmy and I to fish the rest of the night trying to make drifts, freeline 2 poles and keep the boat in position and throw a jig over when possible. Plus 1-2' forecast was off by a bit, ended up being 3' with the occasional 4' mixed in, not bad just added to the difficulty. All the spots were loaded with blackfin, but unlike last time the majority of the schools were made up of small 3 -10 lb fish. Made a few moves to nearby rigs and drill ships only to find more of the same. Picked up a nice blackfin here and there, kept a few small ones for chum. Then about 4:00 the sea sick one woke up felt better and in 30 minutes the tuna began to bust the top water eating hardtails and seas laid down to 1'. Seasick hand freelined his first chunk for the night and I'll be a son of a bitch, nice 20 lb blackfin starts ripping line. We hook a nice yellow on the bullet popper and pulled the hook. The next yellowfin that hit bullet popper came clean out the water after a 30 minute fight he hit the icebox. Had 2 or 3 strikes on the bullet poppers that never did get hooked. By then the sun was about up, still had blackfin hitting the water but they were spread out pretty good, decided to head in while she was nice and laid down. All in all we ended up with (1) yellow and (15) blackfin. Caught most of the blackfin on the flatfall jigs except for (2). Made it home safe and sound, was a long night.

NOTE: Don't let someone who just woke up from being seasick take pictures of try and gaff a tuna. Pictures are blurry and hit 2 tuna in the upper loin.
Reply