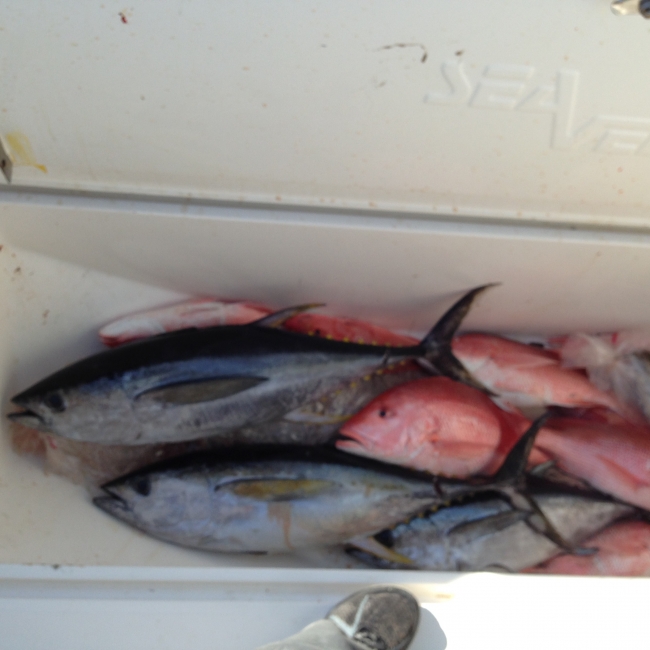 Well after a learning a lesson on the last trip, we managed to make up for it this time. Instead of beating the crowd out, a stop at the end of Northeast Pass and within 45 mins there were enough pogies for at least 2-3 hrs of tuna fishing. Its no secret now where the tuna are, we elected to go to 989 and hopefully escape the core of the early boat show. This was the case until about 11:00 which at that point we were headed back toward the 9 nm mark. The new 29' Seavee after two trips put its first 2 yellowfin and 1 blackfin in the hole. 1st yellowfin roughly 40 lbs took the live pogey about 100 yards out and soon after a 30lbs blackfin had the second reel set at about 50 yards out. While I was finishing off the blackfin Jimmy dropped a pink flat fall out of the front of the boat and another 35 lb yellow came up and within 20 mins she was on board as well. During this time we had drifted out of the main line of boats across the front of the rig to give other boats a slot to move in and had to reposition upwards around 2-300 yards. With time pressing we made another drift or two, a few captains we sell baits too hailed us on the radio on there plans so we knew it was time. Headed in to the 3 kings after VK 900 was loaded with boats to try and get an AJ, unfortunately had once shot and the donkey that grab the last live pogey about 100' down got the better of us, he broke 200 lb power pro rubbing against some part of the rig. Had a few smaller strikes on the jigs brought up 1 almaco. Stopped at the last set of rigs on the way in and finished the day with 10 snapper on flat fall jigs and cut pogeys. We were happy with the catch, the women got to real in some tuna and a few snapper, weather was picture perfect, water was beautiful...... Hated to leave.

Plan on making the 1 weekend for federal snapper season, to get a few of those 18 -25 pounders. Will post if the trip is made.

Also, we just added some new products to www.strikertackle.com : Flat fall Jig Assist Hooks and Fishing Pliers. Check Them Out !!!!!