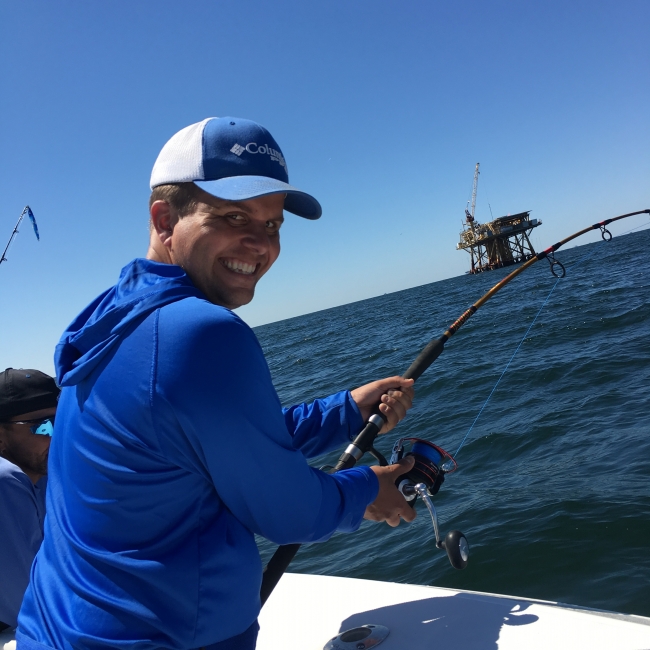 Finally after nearly a 7 month hiatus from the gulf waters Striker Tackle was able to make a trip in the 29' SeaVee. We spent the better part of the day chasing tuna, unfortunately with the wrong bait, we should have spent more time gathering up live pogies instead of trying to beat the crowd to Elf. Once guides showed up they put a quick hurting on the tuna with live pogies freelined and they bugged out in search of more.

Around 11:00 we decided to switch gears and headed in for our snapper. On the way in we spotted fish tearing up bait in the open water and swung in with Striker Tackle's Bullet Poppers and it was fish on immediately, it wasn't tuna as we hoped, big school of Jacks. The poppers held up fine against the brutes and we know that they are gonna pull up some good fish swimming along the grass lines this summer.

One quick stop at 12 Mile Rigs and a five man limit came in the boat in less than 30-45 mins. Some were caught on squid, but most were caught on Striker Tackle's 170 flat fall jigs, also thrown in were a few B-liners and a Mangrove. Alamaco jack's came up on the flat fall jigs as well. None of the snapper were monsters but all good eating.

At that point we decided to make a quick run to the In-Betweens to pull up some AJ's. We brought a butterfly prototype jig that will soon be available in 250 grams and let me tell you, first drop an estimated 50 pounder grabbed it and after a 30 min battle a shark took everything but the head in one clean bite. Two more were hooked on the same style jig, one lost to the rig and one shook loose, probably due to a shark chasing his ass.

Fortunately before we left I dropped down one last time with a flat fall and to our surprise a cobia grabbed it and was landed shortly after. We managed to put a solid box together given we only fished about 2 1/2 hours not targeting tuna. Thanks to Captain Hoop for the tip on the Tuna's whereabouts, he's gonna give me an earful I presume when he hears the strikeout on tuna.

We will be making what Jimmy and I call the wives trip in 2 weekends weather permitting. This time we will be targeting just snapper, B-liners, AJ's and if time a few drops for a warsaw. Will send the post, these two girls can fish as well as anybody when its comes to rig dropping.

Thanks again to everyone who pre ordered tackle, the last two weeks we packaged and sent out tackle till midnight every night to catch up. Our Islander style trolling baits will be here in a few days as well as the new pink and silver ST 30 trolling lure. We are working on processing a brand new line of jigs that will be available before the summer.

Also we have 100 gm Flat fall jigs currently being produced.

Tight lines and be safe,