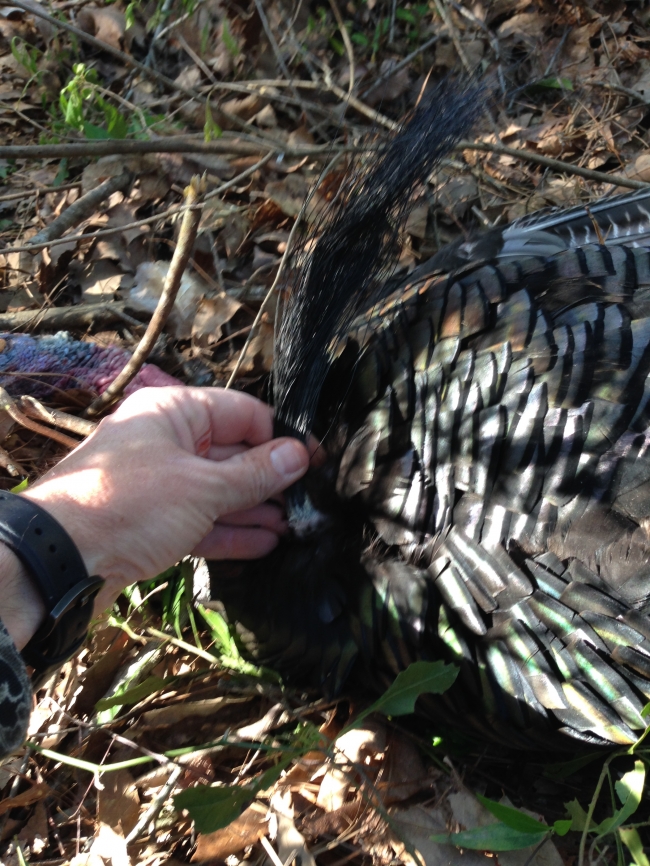 This year has been a tough year for many of us that work in the Oil and Gas industry. I have been fortunate to be able to take annual turkeys hunting trips with my friends and kids for several years but this year, I have not been able to get away and put these types of trips together. A good friend has been after me for some time to come with him to his lease in Mississippi so that I could attempt to take a gobbler. When the invite came this year, I took him up on his offer to try my luck in the Magnolia State.

I received a phone call from my friend on my way up to his place. The conversation went a bit like this... 'Look, I know that you are all into calling turkeys and getting them to come to decoys and video but...if I were you, I would go sit on this road this afternoon and not make a sound. He then told me that one of his lease members had seen several toms and some hens just days prior on the road. This area of his lease is a place where turkeys go every afternoon on their way to the roost area.

I got dressed as soon as I got to his camp around 2:30 in the afternoon and we headed to the spot directly. Once there, I took his advice and set up right off of the road in the tall stand of pine timber with little to look at and no decoy in an ambush set up. It was a tough hunt only in that the wind was blowing hard, singing through the trees, making it difficult to detect the slight sounds of turkeys making their way to my position. I was set up so that my gun was semi-mounted so that with little movement, I could turn to shoot either direction depending on which way the birds came down the road. My friend had told me that the turkeys would come around five o'clock.

As I was slowly looking I caught movement to my right. There was a gobbler exiting the cover to my right at just 10 yards! I looked at my watch and it was five on the dot! As soon as he took two steps he caught my silhouette and turned quickly, going back into the brush. The sun had peeked through the trees a bit and cast me in a bad light. I couldn't believe that I had just got busted by a sneaky Tom! This was supposed to be an easy out, sure thing hunt! I turned 90 degrees in my seat, pointing my gun so that I could take advantage of the situation if it would present itself again. I picked up my slate call and made a few soft clucks and then shut up. Twenty minutes went by. There was a small hole in the brush at about twenty yards where I could see a glimpse of green from the grass on the side of the road in the distance. I gazed intently on that spot with my gun mounted. As time went by I found it difficult to keep from turning to look behind me down the other side of the road but I held to my plan. As I watched the spot I saw the green in the distance turn to black....Ha! He was coming back undeterred. I pushed off my safety on my shotgun and leveled down on the area just left of his direct path behind the edge of the trees on the road ahead of him. He stepped into view and bent down while walking to reveal his beard giving himself away as a mature gobbler. BOOM, down he went! I didn't give him time to bust me again!

I got up and exited the tree line just to see another gobbler running down the road and taking off flying away around the corner. He had been with a buddy. Maybe his buddy was the first bird to see me and didn't do a good enough job of relaying the message. Regardless of how the hunt went down, it was still one for the memory books. I always enjoy spending time outdoors and enjoying the blessings of good friends and opportunity that God gives me...... even though it was an Ambush!