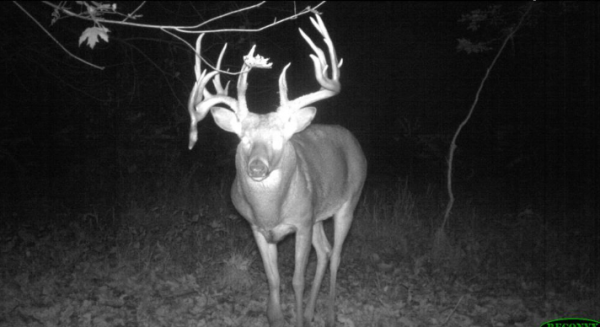 I believe it is absolutely ridiculous how a dog can come onto my property and run a deer off of it while a road posted deer hunter waits for his opportunity to shoot at a deer crossing the road, Which is illegal plus the dog was trespassing with the intent of running a deer off of my Property which should be illegal too. Hoping for advice to better preserve my 400 acre lease, I contacted the hierarchy on how to legally deal with this issue but the only thing they asked me was, 'Is your property Fenced in?' My response, 'I just told you, I am hunting a 400 acre lease. Do you really think I for one can fence in 400 acres?'

I bring this up for two reasons. #1, They know we have a large quantity of great quality/trophy sized bucks. #2 They intentionally release the dogs extremely close to my west property line then the dogs will run through my property pushing these large quality size deer off of it to the east side of the property or to the main road, which is where they shoot at the deer. For example last year while deer hunting, I had a buck coming in my direction. According to my range finder, he was 500 yards out. My whole body was trembling due to this buck. I have never seen such a tremendous deer. However, before I could get off a shot, I could hear dogs barking in the background. I could only pray they were not onto him. Unfortunately, He then raised his head abruptly looking in the dogs direction, then quickly scattered off the field and out of my vision. The dogs then crossed in the same location he was previously posted. I heard the dogs continue to bark as they started to approach the road, which runs through my property. I quickly decided it was time to get out of my stand. About half way down the tree, I heard gun shots from the road. MY HEART SANK to the ground full of complete anger.

I hit the ground running. When I was almost to the road, I heard the words YEAHHHHHHHHH!!!!!!!!, WOOOOOOHHHHH!!!. The guy had shot the deer in the middle of my two pieces of land from the Road! Once I got there, I confronted the guy and told him how disappointed I was in him and his trespassing dogs. He then said the one thing that I can not stand! 'They are dogs. They do not know property lines.' Needless to say, the deer weighed in at a staggering 295 lbs and scored 172 with a 21' inside and a neck the size of a typical yearlings chest. Also later in the season, I took out a buck that had a huge hole in his neck. The same dog deer hunters approached me and said we shot at the same deer two days ago. We tracked blood for about 4 hours. They shot him in the neck placing a monstrous hole in this animal's neck while the deer was running. Due to this hole, I could not mount him. He weighed 225 lbs with a 19' inside spread.

Here is my concern!

If a dog can run onto my property to chase deer off of it into the dog hunter's direction, Why can I not go onto anyone's property to kill a deer? Or why can I not go onto someone else property even without a gun to make some racket to scare the deer off their property into my buddy's, whom which will be posted on my property, direction? That would be trespassing!Back to the dogs. I mean I can not shoot the dog. If I did, I would be in trouble. I tried taking the dogs collar and only returning it if a fee was paid, which also got me in trouble. I even captured the dog, Loaded him up, and brought him to the pound. Even that got me in trouble. So what are trophy seeking law abiding citizens such as I suppose to do? The correct answer; NOTHING. We have to sit back and watch with a large smile on our faces as these dogs chase beautiful trophy buck off of our property and bystanding deer hunters shoot them.

I believe it is time to make a change and stand up to this 'tradition.' Dogs are trespassing; shooters are posted in the roadways; shooters shoot from the road ways; If the shooter hits a deer, most of the time the deer gets away thus only injuring the poor animal like the 225 pounder I shot.

The government needs to step in and fix it because the game wardens and Mississippi Department of Wildlife and fisheries do not have the power to do so.

Make a comment. Tell me what you guys think.

Visco
You do have legal rights, the best way to make sure you're correct is to talk to one of the local or better yet federal game wardens. Then take that information to a lawyer and you will then have your base line for what you can do.

I was just in NC hunting, and was speaking to a land owner who let me hunt her property. She had the same issue, and had already shot 5 dogs this year. According to her, it was legal in that state as she went to a game wardens up there (Federal) and he specifically told me that in NC you, the property owner, has the right to shot or collect up a dog that comes on her property as long as the property was clearly marked and that the hunting club running dogs was aware that you did not want them on your land. I am not sure if this is the case for MS, but you should look into it.

Also... on a common sense note... I am from MS just as you're most likely from here as well, and we know how some of our own rednecks can be, so play it safe and good luck with this issue.
Reply

Beerslayer 1
I can understand your frustration. Nothing like having a pack of dogs roll in and mess up your hunt. I've been dog hunting, probably most of my life, and truly believe it's a tradition that is worth keeping around. It doesn't take long for a few shit heads to screw up something for everybody else. Please keep in mind there are some good guys out there dog hunting that deserve to keep their tradition alive. I now mostly still hunt, and I do it because I enjoy the challenge of trying to kill a deer in one of the most heavily pressured areas probably in Mississippi (Leaf River WMA). It's very difficult to have continued success year after year in a dog hunting area. My advice is to embrace the challenge, and try not to let it drive you crazy.
Reply