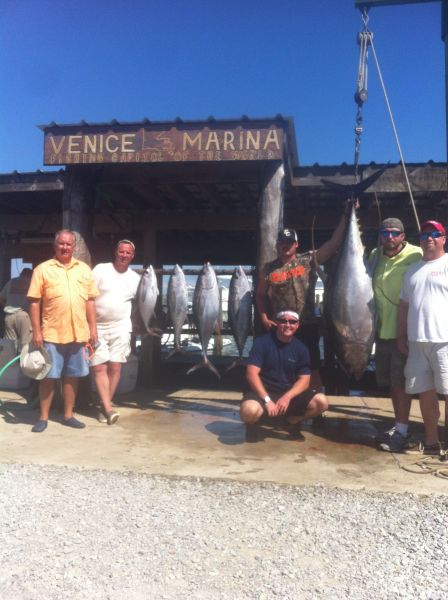 Been a while since reporting but I did happen to get on some of the shrimp boat action we all been waiting for. We started out last Friday with a crew of regulars who didn’t need much advice when it’s come to filling the boxes. We managed to fill the board with Yellowfin tuna, AJs, snappers. Saturday we decided to race everyone else to the shrimp boats and won. We pulled up to the Lucky Tommy and immediately pulled a few fish off her stern. With just our cut bait it was difficult to get the big ones to eat. That first drift we managed three Yellowfin after about 45 minutes of drifting watching fish swim around the boat the whole time. Eventually we decided to run up to a boat that had its nets up to get us some better bait. We immediately turned the boat back towards our Lucky Tommy and squeezed our way in there. We began by hooking a monster on one of our choice baits recently acquired. We stuffed a 170 into our boat and finished strong. Early enough to finish watching the early game. Sunday, with our leftover bait and a confident feeling we left the dock with great expectations. No tuna on boats, but plenty to be found around where the boats should have been. We started fishing next to some birds and a few hours later we were headed in early again with a boat load of fish and tired anglers.