From inshore to offshore fishing is getting right!!!! 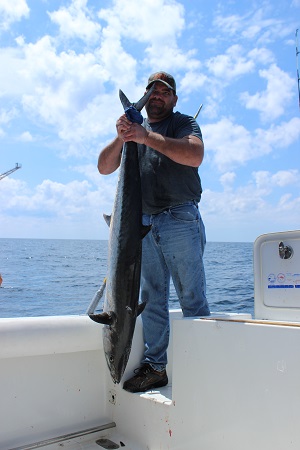 The Biloxi, Ms Charter boat Whipasnapa, has really enjoyed some fine south Mississippi weather along with some great friends and fishing action this week. WOOOOOHOOOO!!!!!
Got in another rig trip Sat. with calm seas great companionship and absolutely beautiful weather and crystal blue water. As we shut ol Whipasnapa down some 50 miles out there the 1st words out of every bodies mouth was the water is mighty blue captain. After two quick stops to gather up some live hard tails and big blue fish for bait we headed over to 265 area where the action was tremendous. With a 6 man crew of Bud light stock holders that didn't have a bet on the biggest or the most fish caught, but on who could consume the most bud light!!! Not sure who won cause as they left that evening it was down to 2 guys an they were still going strong!!! (sure nuff professionals). Anyway, good time was had as we kept 2 guys on the drop shot rigs hitting the lil wench men, white snapper, an several lesser Ajs!! Two on some amberjack action and couple kept usentertained on some large king mackerel and sharks. As ya'll know 1 or 2 Amberjacks back to back will surely make you need a beer break. But, so will a couple of big kings an sharks. Of course dropping down an reeling anything in down 270 ft well most diffidently make you need a (BEER BREAK). Seemed to be the most common phrase of the day fir sur (BEER BREAK)!!!! Just about as quick as you could get a bait down or in the water period something was going to eat it, and as you were reeling that something in most of the time it was going to get eaten by something even bigger!!! OH SHITTT!! :) (BEER BREAK) Lots of heavy action for sure!! Bout worked me lil fingers off!!!!
The lil snappers were hitting squid on the drop shot rigs. The lesser amberjack where hitting a lil sparkle beetle jig, kings and amberjack were hitting live hard tails and blues, the sharks, barracuda's an kings were hitting anything we had hooked an were trying to get in the boat. Probably only got half the fish we hooked in whole, the rest were bitten in half or engulfed an ripped off the hook!!! Or took fish hook, line, n sinker!!! (BEER BREAK)
On the way back towards Biloxi, we stopped on couple ol snapper spots and let the guys fight a few beautiful red snapper!! Most were low 20s high teens. But they were diffidently there an just a tad hungry!! Should not be a problem keepin our limiting out streak alive come snapper season!!!
Inshore is really coming around also. The ol white trout, ground mullet are starting to show up on the reefs and still hitting a few reds, specks, flounder here and there. Hit and miss on live bait but definitely do lil better when they have the live shrimp!!
Still able to catch the reds, black drum, and of course the ground mullet and white trout with the fresh dead. Winds are laying, water temps are hitting the mid 60's and high expectations are definitely setting in!!! Cobia's surely within 1 to 2 weeks away for sure. SHOOO I NEED A BEER BREAK!!!!!

So come on jump aboard and lets go hook'm up!!!

Many thanks to all and God Bless!!!!
Capt Robert 'Earl' McDaniel
www.whipasnapacharters.com
228-229-6978
Reply

Mike Guerin, Mississippi Sportsman Field Reporter
That is one heck of a king mackerel right there! I sure use to love catching those suckers. Not the best on the table but they sure have some cool looking teeth!
Reply