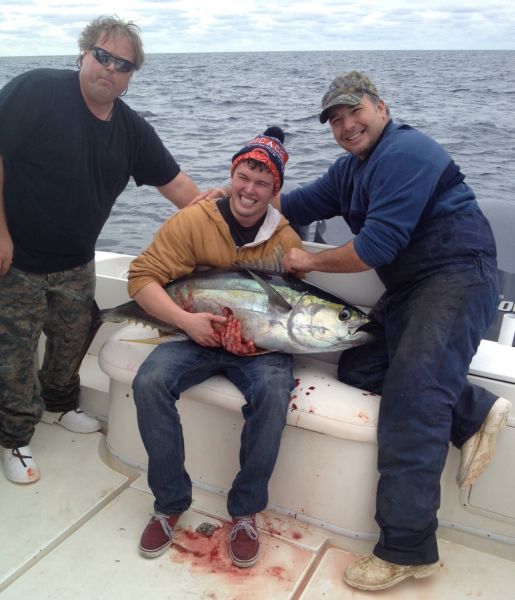 After two weeks of unfortunate cancelations due to bad weather, we finally managed to make it out. It seems when the weather has been nice, we didn't have anything scheduled. We met our crew and went about explaining how wahoo would probably be what we would be targeting. They all said great, BUT we want TUNA. Would there be any chance of catching tuna? We here this all the time, considering Venice is aka TUNA TOWN. Obviously, we fished for tuna and passed right by where I thought would be the best chance for some wahoo. We did however plan on making it back that way later in the day with high hopes of finishing the day off with some ONO. After all this we found our self off the shelf at a floater working on executing plan one. We circled searching, eyeing the bottom machine the whole time. We did see there was significant marks, but were on the down current side. Well that sucked because the fish were holding real tight to the structure and wind was blowing opposite the current, which happened to be pushing us too close for comfort to the massive oil producing structure. Once we were tight up on it. I dropped a jig down and immediately hooked into a big cuda. So after that we decided to try the other side which at first didnt seem to be holding any fish. We started chunking with pogies and started noticing small fish at first, but after about four drifts we finally started to see some signs of encouragement. Unfortunately no bites though. Then decided to cut up cuda in my special way. I really hated to do so since I know how good they taste. Believe it or not. I ate em when i was a young spearfisherman and about a few weeks ago had some with a crew from brazil. They insisted. Anyway, Tuna like it too. Because first drift back produced a small but legal yellowfin. After all the work we were thankful for anything. Then went set up again, same story, cuda chunks. That drift produced two YF about 60lbs and two barely legals. We also had two very nice almaco jacks as well, which also taste great. After that drift we had no more cuda. WHat to do? what to do? After trying pogey again with no luck, we started jigging for anything on the up current side. Nothing. So we moved back down current and believe it or not. I jigged up another Cuda. I actually never thought i would. It seems they were really hungry for the lead. Well we got back on our drift started the program and after a few drifts we were back on em. Put a few more barely legals in the boat. Then one rod started screaming. The angler was confused and took what seemed like a lifetime to set the hook. Well I guess we gut hooked a big one, because it bit through our 60lb flourocarbon in a flash. Then seconds later, Bam another rod went screaming but seem to break off on a splice. I really cant explain that one. We Probably caught fifty fish on that same set up. After a few more drifts our crew decided they had enough red meat. Excited to get to the wahoo, we put the boat in gear and headed north. Its nice to cruise at 52mph at 4300 rpms. The Fountain is really built for speed. I do love getting where we need to go quick. I am getting spoiled considering I also run the Glacier Bay, which is built for comfort. Wahoo fishing was uneventful to say the least. Two boats already in the spot with no luck. The wind had changed from south to west and the water seemed different from the morning. We did catch a few blackfin tuna which are still fun. I call them your neighbor fish. You know? the fish you give to your neighbors. After jigging for AJs and loosing some very expensive gear we decided to take it to the house. It was probably the worse day ever for us jack fishing. Current and the depth the fish were holding at played a big role in our inability to pull any out on this day. We finished the day with nice sunset over the west delta bay and some good red meat. Happy anglers who said that these fish were the biggest they ever caught. It was nice to hear. Anyway, hope everyone has a merry XMAS and a happy new year. We suppose to be back at thurday thru sunday. Its all up to mother nature though.