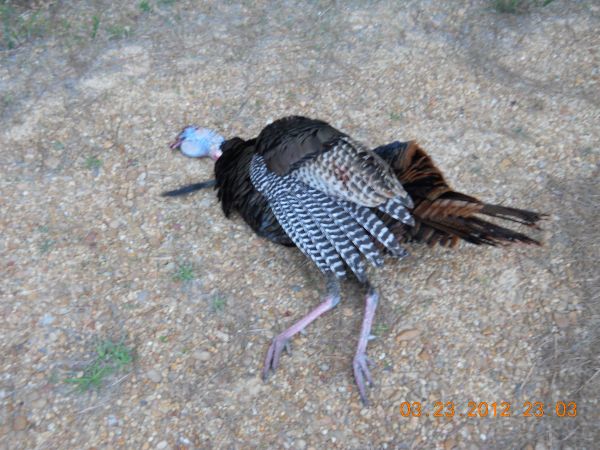 From 4-6, I just set on this ridge and listened. I even took a much needed nap as I was worn out.

After making only 1 or 2 series of loud yelps while sitting there, I had produced no gobbles.

So I got up and relocated to a roost area. After I got set, I made an excited hen yelp series from my Primos heartbreaker and ended with some very persuasive clucks.

Right away this Tom gobbled about 250 yrds away. I put my box call down and didn't make another peep until I shot him.

He gobbled again about 5 minutes later in the same spot. Still I sat quietly and didn't move or call.

5 more minutes went by and I could here something walking in between 2 ridges. From where I was siiting I could see that bottom to well.

Yet, I knew that was a turkey, so I went ahead and made a quick shift to the left to get lined up. Next I hear phhhhhiiiitttt-drrruuummmmm... And then again. I knew he was within 30 yards and was gonna pop his head up and take a look.

Sure enough there's is his big ol' white head as he stepped up to take a peak. I was already on him and had made my mind up not to play with this turkey.

Years of hunting Forest Toms has taught me not to expect him to come in and strut and gobble all in front of me for 15 minutes. Usually these smart birds will stick their head up for a peak and if they see nothing they move on....

So as I'm starting the process of taking the safety off and the preparing to squeeze the trigger a pilated wood pecker started up what seem right over my head and this Tom gobbled at him 25 steps from me. Lucky for me all worked out as I was in the midst off shooting my Remington when he gobbled.

Mike Guerin, Mississippi Sportsman Field Reporter
Congrats
Congratulation. Great story. Of course I haven't been able to even get near the woods since turkey season opened. grrrr!!!
Reply