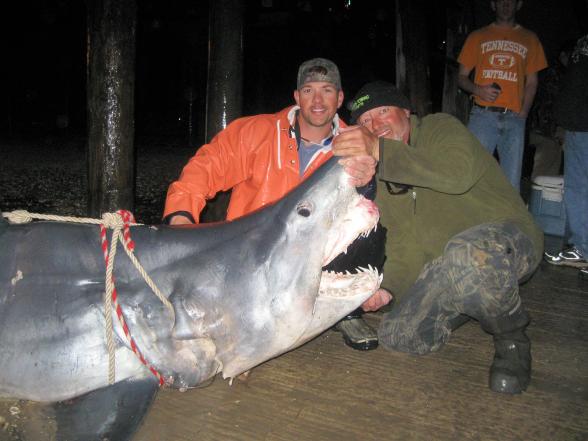 Tiger Sharks prowl both the in-shore and open waters of the Gulf of Mexico and are tireless feeders that can attack anything, everything, anytime, anywhere. They are tenacious, acrobatic, and terribly strong when hooked providing even seasoned big-game fishermen a test of skill.

The Tiger Sharks' eating habits make it a good bet for a ‘trophy catch’, but its aggressive tendencies in shallow water proves it is a predator that poses danger to humans.

As fishermen catch and cut open Tiger Sharks; the source of their “eats anything” reputation holds true as fish, crabs, turtles, stingrays, birds, other sharks, nuts and bolts, lumps of coal, articles of clothing, boat cushions, tin cans, random garbage and even car parts have been found!

Tiger Sharks even will sometimes attempt to ram or jump into a boat before they are even hooked in an effort to reach the source of the bait that drew them in the first place!

Tiger shark hunters must treat this eating machine with utmost respect and once hooked, the shark should be fought until completely exhausted and then killed before being brought boat-side or onto the deck. A living shark brought close to an over-confident fishermen can cause serious injury as the shark can bite with strength until it draws it’s very last breath.