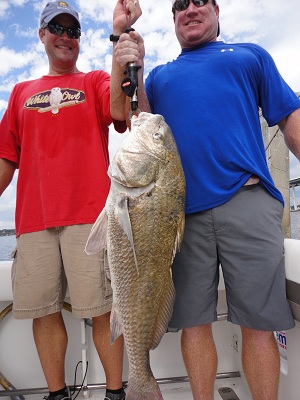 Camping, Fishing, Fall is Great!!! 9-26-2011
The WhipaSnapa Charter Boat, down here in Biloxi, Ms., welcomes those great lil signs of fall air.
Mr. Will Lambert and Co-Workers (friends), boarded the WhipaSnapa for well, just wanting to go on a boat. We all know, that's always a good thing. But they didn't mind if they caught a few fish while out (on a boat). The after lunch trip crew ate a lil, drank a lil and kept there stings tight which lead to some pretty good action on sheepshead, drum (red and back), piles of reds. But most of them were just undersized. Still a hoot to have on the end of the ol light tackle spin cast. Since the trips were catch an release, even better. A couple flounders and some nice trout fell victim to the quite pleasurable crew. For the most part, a few live shrimp, an some fresh dead, were baits of choice laid relaxed on the bottom.
Gotin 1 those Horn Island camping excursions also, getting that time of year were camping is very nice. And OMG! Horn Island might be one of the greatest places for some that good ol' R&R. Think everyone should try this very tranquil setting at least once. And probably once a month could be very therapeutic. WOW! From sunrise to sunset the beauty in between is just amazing. Just sat an soak it up!! Walk an soak it up, an sit again!! An of course dipping a soft plastic across the many grass beds for some reds an trout, would surely prove exciting as well..
Mr. David and Lisa from Texas, jumped aboard that WhipaSnapa for lil early morning adventure. As I dropped the anchor 1st we just sat an soaked it all up. I mean I see it daily but sometimes it's still just nice to sit an appreciate the many blessing from Mother Nature we are rewarded with daily.. But we eventually commenced to working on some of those big o'l fall White Trout . Yes! the fall trout generally run a bit bigger than the spring. The feisty lil fighters have been thick and hungry. Pretty much unlimited, just sit and reel'em in till you get all you want. White Trout are quiet the pleasure to reel in and very tasty at the table also.
Anyway thanks so much everyone for sharing your South Mississippi adventures with us!!! LOVE IT!
Do have a couple more those offshore adventures that need a person or 2 so holla and get on a boat!!! Starting to get into the off season as well so catch us during the week an we will make the price right.. You wont regret it!!