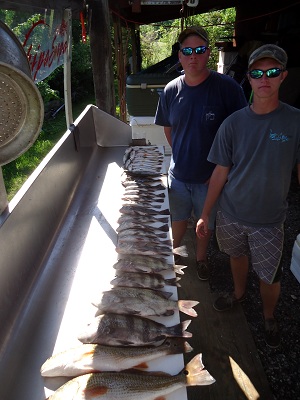 Fishing for Smorgasbord! 9-12-2011
Well whatcha know, that Biloxi, Ms. Charter Boat, WhipaSnapa! done got on some great light tackle Inshore action this week!!!!
I Know Right! Been bout 2 weeks since did some rod bending, string stretching, Inshore light tackle Fishing. An tell ya what, really a blessing to spend such lovely mornings on the Bay of Biloxi. I like my times out yonder, the Island chain as well, but the Back Bay, just as good as it gets!! Slam gorgeous weather, companionship, strong fish bite just made for some great times (on a boat) 4sure!!!!
The Whipasnapa's great company for 2 of the 1/2 days were the Webster's, Mr. Harold and Anna Webster from Jackson,Ms, really a pleasure to spend some time on the water with these fine folks. Thank ya'll so much! A true blessing!!! The couple had a really strong bite actually, we were using some nice lil live shrimp on the sheeps, plus some conchs. Fresh dead was pretty much catching everything else for the morning adventures. With all the fresh water, I was a lil worried, but cooler waters turned on some really nice sheepshead, an the water was really pretty good, considering tides were just right..
As Mr. Harold and I shared our thoughts of the many ways to prepare this smorgasbord of fine fish, Mrs Anna was hoisting over the side that WhipaSnapa. Mrs. Anna was just saying please just shush!!! an fish. OMG!!! She was flat pullenumn!!!! The team caught reds, blackdrum, sheepshead, trout, croaker, etc..... on the light tackle spin cast rigs. And I'm sure with the smiles I seen, these fish will get enjoyed to the fullest for some time.
Team Scout from Latimer, Mr. Austin Fox and Gus Lamey, wanted to keep the action going in the Bay of Biloxi, so after I told them of the action an Saturday was here. They decided to sacrifice an go for couple hours. And man they really whoopedum! Reds, sheeps, flounder, specks, white trout, ground mullet, black drum all fell to the duo.

Thanks for great times on a boat!!

An as temps start to cool, just remember the fishing is just heating up!! Sep, Oct, and Nov. great months to get out there for some great Inshore Action. And the wide open Gulf of Mexico also awaits!!! Fixin try to get on some tunas as well!!