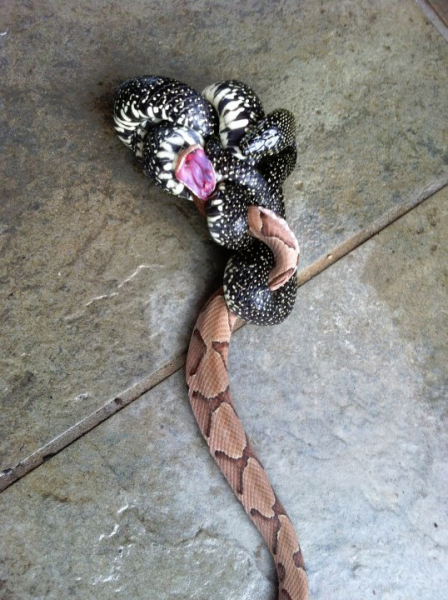 Some people say there are no good snakes but I don't agree. Non-venomous snakes are fine by me and I am not particularly hateful of venomous ones either.

But a friend of my wife's saw a king snake in his yard but just let it go its merry way. A few days later he was greeted by this on his back porch. The king snake making short work of a copperhead.
Reply

Funny story: I walked out my front door a couple of weeks ago to hear one of my neighbors screaming and dancing around just outside her door. She soon bolted into the house, and I could yelling and hollering and such.

A few minutes later, her teenage son appeared and started poking around the flower bed with an axe.

'What's up,' I asked, pretty sure I'd know what was going on.

I chuckled and went about my business.

Soon I heard a yelp and the axe hitting concrete.

I walked over to their house, the kid was finishing off a king snake.

'You know those kill venomous snakes, right?' I asked.

'It don't matter: Momma told me to kill it, and she wasn't coming out until I did,' he replied.

I laughed all the way back to my house.
Reply