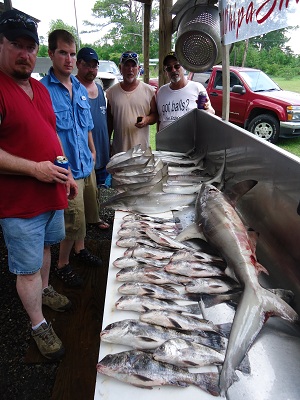 Carl Legett Tournament Fishing an more!! 8-8-2011
The Biloxi, Ms. Charter Boat WhipaSnapa running a lot of great times on a boat. The Hester's did the lil eve sunset cruise. Which was a very nice relaxing an beautiful lil cruise. Really just nice to go take a boat ride sometimes an soak up a great sunset, the shoreline and coastal views along our Biloxi Ms. Shore..
Mr. Kevin Thompson an Working partners from NW. Louisiana were in Monday for the 6hr. combo shark an light tackle. Boy; steady shark, drum, an trout action for the guys all 6hrs. reely but some fish in the box an released several also... The Viator's did a lil morning light tackle trip that started out a lil slow but finished strong. Talked to my crabber buddy and said all his crabs had died that day in the particular we were fishing. Think that explained the no bites in that area. But we moved up the bay and found some really nice trout that pulled the guys string for some great excitement the last couple hours. They were really catching on an were reeling them in 2 at the time...
The Carl Legett Tournament which is to me the best tournament we have! I really enjoy this 3 day fishing challenge. Probably one of the 3 slowest days I can remember, well not slow catching just catching the ones to bring home was slow! Them stinking big o'l Red Snapper kept eating everything that hit the water. Made trying to catch anything else a lil challenging. Oh an the currents offshore was ripping, I mean ripping!!, bout 4 mph or so.
An for the most part, mangroves are a lil more shy when approaching a bait and when the current is ripping the mangroves have to get away from the rig and the Red Snapper wind up with most of baits. O an Speaking of Baits lord help me with the lil fellow that STOLE my 200 croakers an sold them... We did manage a few mangroves and for the most part they were all big nice Mangroves. In all we finished with was a 3rd place Mangrove. Held 1st, 2nd, and 3rd for 2 days on Mangroves till bout hour before scales closed. And held 2nd and 3rd on amberjack But failed to finish with a spot. So a few daily prizes with a 53lb amberjack and a 11lb mangrove being our biggest. We lost several huge amberjack and mangrove to the rigs. But its just amazing how fast them fish can get to that rig for freedom.

THANKS EVERYONE AN MAY GOD BLESS
So moan down and try your luck got a spot just for you!!!