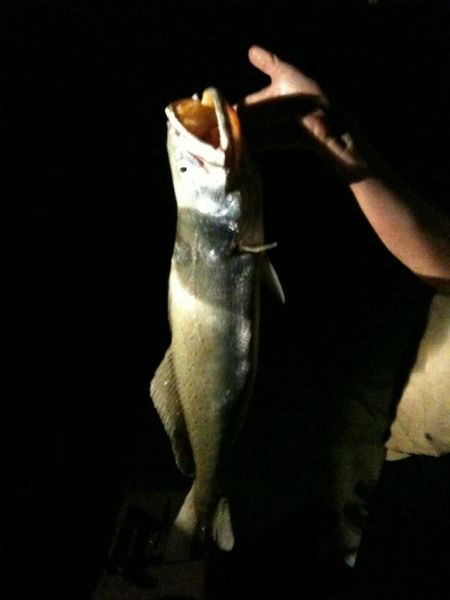 I am dumbfounded/perplexed/amazed... not sure what to call it. A friend of mine from work made a trip to Gulf Shores a few weeks ago. He isn't really what you would call an outdoorsman. He doesn't hunt and rarely fishes.

Well while at gulf shores he takes his son fishing. On the bay side at night his son catches this really large trout or something. They don't really even know what it is. They take a quick picture of it with their cell phone and put it on a stringer with a few other speckled trout they had caught.

They believe the fish to be about 7 and 10 pounds. They don't really know, other than to say it was at least three feet long. They proceed to take the fillet the fish and eat it that night!!!!

Can you imagine??? Doesn't it always seem to work this way? I have fished for trout off an on for a long time and I have yet to catch a trout this big. If I ever do it is going on the wall.

A friend of theirs wanted to see the fish all excited. (they went on vacation with a small group) He was asking them where the fish was thinking they had it in the freezer. All he could do was show him the filled remains of the monster trout. Amazing!
Reply

Mike Guerin, Mississippi Sportsman Field Reporter
I wish I could fully describe or show the look on his face when he realized what they actually had. As he was describing his buddy question him on where the fish was, he was showing the old 'shrug shoulders' 'oops what did I do look'.

They knew it was large but had no idea about the true size. I compare this with someone that goes fishing for the first time and catches a 12 pound bass only to eat it. Just Crazy!
Reply