A wet, but productive day. 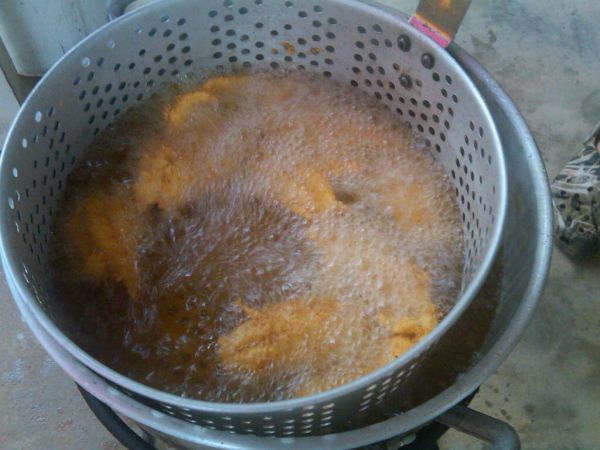 Have not had the chance to fish with my main partner in quite a while until this past Saturday. What a great, but wet day.
We launched from Pass Christian around 5am, armed with live croaker. It was choppy, so we took it nice and slow heading out.
Picked up 4 Reds and 1 Speck pretty quickly, then the thunderstorm rolled in. So, we donned the slicker suits and huddled up under the tee-top with a beverage and some good conversation with an old friend. The funny thing was, just as the shower hit hard 'nows when the Specks will hit.' We had not caught a Speck yet at that time. But, not 30 seconds after he said it, one rod doubled over and he pulled in a nice, fat, shining Speck! I laughed for a while after that.
Once the Shower began to slack, we made a move over to Isle Au Pitre. We laid into them fairly well for a while on the croaker. But after a little bit, they turned off. We experimented around and found them hitting Gulp Shrimp in the Natural color only. After a little while they went back to wanting Croaker, but only for a little bit. Then more experimenting and found them again, but now they wanted the Gulp Shrimp again, but this time on my favorite Sugar & Spice color, but under a rattling cork (Cajun Thunder seemed to work best). They remained for a while, with a slow, but steady bite, then changed their taste yet again. Now they wanted the Salt Water Assassin in Opening Night with Chartreuse tail under a cork.

It was a wet morning in which we had to work, experiment, and be flexible, but it turned out to be a perfect day with a guy's best friend.

Other news......
Sold the 19ft ProLine Sportsman Friday before last, but picking up a beautiful 2006 24ft Champion Bay Champ (with a 300hp Yammie behind it) this coming Tuesday. I'll let ya'll know how she rides. Right now I feel like a 7yr old 2 days before Christmas!