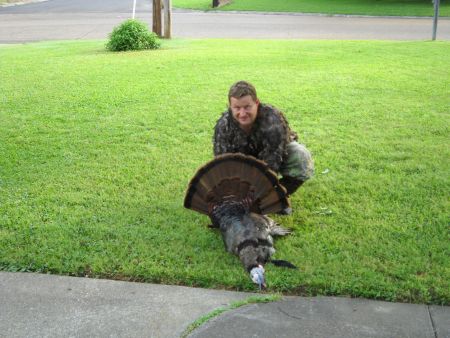 After getting back in and taking pictures on Stevan Segal Jr. I had told my wife I got to go back. So I packed my gear and left the Metro area around 5pm. When I got to where I needed to be it was roost time.

I went to 5 places and nothing. I had no roosted bird. My confidence was low. I decided to go but before I did I made one last attempt to roost a bird. When i got out of my car he gobbled and my owl hoot. I'm sure it was more of a shock gobble than my owl sounding pretty. I tried several more times to get him to gobble so I could pin point him but he did not answer. This bird was roosted about 150-200 yards off a gravel road. I had gotten lucky.

I got there about 45 minutes early the next morning and slowly made my way to him coming at him from another angle. As I stood patiently, I watched a hunter who in my mind was late getting to a spot. But good for me cause this Tom was hammering at the truck driving by on the gravel road. He must have gobbled 6 times.

This gave me the upper hand and allowed me to move into position. I placed my decoy up the ridge from me about 25 yards to my right. As I'm facing him at 12 o'clock, I see another ridge out in front of me about 40 yards away. The woods are fairly open even this late in the year.

He continued to gobble about 10 more times on his on. I wanted to call to him but waited about 10 minutes. I took my wing and simulated a hen pitching out of a tree, and he gobbled. I did it again and nothing.

At this point, I'm keyed up and alert. I made 4 soft yelps with my mouth call and shut up. With eyes glued to the trees, it wasn't long and I hear him jump from the limb and he's flying right at me.

This time the bird landed on the other side of the ridge I'm pointed at. When he came up to look, I shot. The bird fell in his tracks at 40 steps.

As I get to the bird the first thing I see is he's missing a spur completely. I rolled him over and saw his 11' paint brush and nearly fainted. His one spur is an 1 3/8' and the other was gone. I imagine the bird to have weighed close to 20lbs.

I named this bird 'One Spur'. He gets the honor of going in my trophy room. This is my biggest bird ever.

I have had a great year and this is the first time I have limited out on National Forest Toms.

I can't wait til next year.
Reply