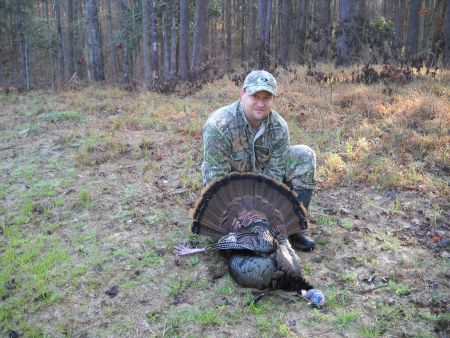 This was my first turkey of the season. I harvested him early in the season in the morning. I had heard about 5 turkeys gobbling that morning from all different directions. The hill I was on I could hear for a mile in some directions.

This bird gobbled 3 or 4 times on the limb at other turkeys gobbling, thus allowing me to get in between 2 gobblers. This tom was closest to me and I decided to focus my attention on him. The other bird had a hen or two in the tree with him as I could hear them yelping.

I did a soft tree yelp and he didn't gobble at it. I used my Primos wing to simulate a hen pitching out of a tree and it seemed maybe 2-4 minutes had went by and I heard him jump off the limb. With my eyes glued towards his direction I watched him almost fly right over me to land on the end of a ridge behind me.

I had moved half way around the tree as he's flying over my spot. When he hit the ground he went in direct strut mode behind probabaly the only green stuff in the woods that time of the year. As I watched him and picked my time to move I realized he wasn't coming to me. He had hit is mark and just started drumming in one place.

At this point, I haven't even called to him while he's been on the ground. After I was able to squirrel around the tree I was soon lined up in his direction. Now I was set for my next move.

I took my right hand and scratched the leaves on the cold ground floor and he folded he wings and marched down to the bottom on his way to my ridge. When I couldn't take it no more I spoke to him so he would stop. He did and the rest is a memory.